A little girl with tangled hair and dirty cheeks peered back at me with fire in her eyes. Something in her had changed as she stood on the front seat of her dad’s old beat up Ford looking through the window mount spotting scope at what would become her life long love affair. A herd of elk skirted a side hill across the Indian Peaks mountain range in the high country desert of Utah.  At 200 yards, and in a herd of hundreds, their size and magnitude alone was enough to spike the curiosity,  and maybe even fear in anyone.  But I was 4 years old at the time, and when the bull bugled my practiced stillness was broken and my eyes shot away from the glass to see in all its realism what it was exactly that had pierced my soul.  He screamed again.  My young eyes found him immediately and my body started shaking.  I wasn’t scared,  I was alive.  My dad’s rough hands helped to steady my little legs,  and the faint smell of dark tobacco and hot coffee in the steaming Stanly thermos offset the crispness of the fall morning that filled the air.  I caught my own movement in the side view mirror of the truck and in that moment the scene was permanently anchored as my earliest memory. I would never be the same.

I didn’t know then what society would call “a hunter. ” I was also blissfully unaware of what my role was to be as a “woman” in that same society.  What I knew then was just how small I really was in the grand scheme of things, and how much smaller the intricate dramas of life were.  I found out much later that the memory would be a moment I visited often to once again anchor myself to the unwavering truths I had come to learn,  and the chaos of social pressures that demanded relinquishment in order for the truth to exist free from their constraints.

Thirty years later, I found myself peering into the eyes of another tangled hair,  dirty faced little girl.  The shimmer of the river flickered and danced in her eyes as she watched me cast my fly rod into  Mammoth Creek. I had made the conscience decision to hold off on letting her attempt the cast for the first time,  in part because I had no interest in spending the next 5 hours untangling knots,  tying flies, or adding exceptional accessories to every native shrub on the creek.  But ultimately, I have come to understand,  if you do not know patience,  the passion for fishing becomes the victim of unmet expectations and frustration.  Patience draws breath into life and exhales exuberance, with or without a fish.

“Can I go back out on the river with you Mae? ” she asked after the first trip was cut short by a rain storm. “I know all of the rules. I’ll stay back off of the water,  I’ll be patient and watch.  I’ll be quiet and I promise promise to not throw any rocks. ”  My heart turned to mush.

“The river can be dangerous sis,  I have to be in charge if we go again. ”

She responded as she bounded away.

She made it to the door in two leaps and started gathering my vest and anything else she could hold that she knew wasn’t off limits.

She must have rehearsed that in her mind ten times by the self admonishing look that came on her face when the word pole slipped out by accident.  I giggled and thanked her. She,  her daddy and I, headed to the river.

Her excitement was contagious,  and she rambled on about all of the things she knows about fishing.  Her mouth moved a million miles an hour and her daddy and I exchanged glances as we walked. She sensed the exchange and hastily added “don’t worry guys,  I’m just trying to get all of my talking done before we get to the river. ” 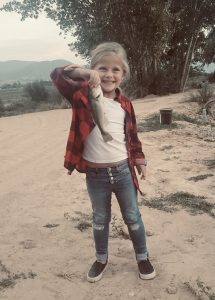 We both laughed,  despite her grave seriousness. She has taken fishing very seriously since the first time I took her a year prior.  That evening I had asked her “are you excited to go fish? ” …… the look of astonishment at the stupidity of my question covered her face like a fresh coat of paint.  “Yes! Let’s go. ” I responded evenly (despite being elated to have a little fishing friend)  “ok, what would you like for dinner when we get back. ”

Her expression deepened “Um, fish.” As if it were the most obvious answer on the planet.

She paused and looked at me solemnly and with unrelenting determination,  “then I guess we better go to the grocery store and get better fish food.”

A year later,  the same little girl perched on the rock beside me trying to read the river. She intently studied the bubbles and the current and gave directions on my next cast by saying “Mae, I think there is a monster under that rock,  the water is deep and dark and the current is swirly.” Her accuracy improved with every discussion about casting spots and her pride when I offered no rebuttal was intoxicating. 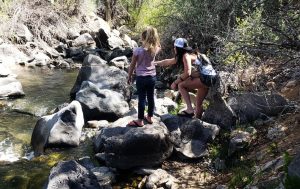 “Daddy, ” she said quietly.  “You can fish down the river below us. I’m going to stay with Mae, I’m learning patience. ” I almost cried,  but choked it back so I could offer her the smile in acknowledgement she deserved.  A few moments passed and she asked in a rhetorical tone that indicated she already knew the answer,  “it doesn’t matter does it? ”

My fly touched the water and started its float allowing me a moment to shift focus.

Her eyes stayed fixed on the water.

“If we catch a fish or not.  It’s not about that is it? ” My heart skipped and I kept my focus on her. I didn’t respond.  She didn’t look up.  She spoke very softly. “Nope, it doesn’t.  It’s about the river.  And it’s about spending time together. ”

Stillness and only the sound of the water moving over the rocks hummed their lullaby.

Words have impact,  more so when you’re fishing.  I said nothing.  Her moment didn’t require my opinion on the subject.  It didn’t need my input or guidance.  I studied her as she sat perfectly still on the rock,  staring at the river and realized,  she was looking at her reflection.  She was talking to the little girl that will always live inside of her , with tangled hair and a dirty face.

She is not my daughter – nor will I ever be her mother.  She has a mom who loves her and has given her a beautiful life thus far.  It’s always a struggle to figure out your place in a blended family scenario.  You love them,  but you’re also limited in some capacity in terms of major decisions,  time,  and guarantees.  I surrendered to that truth a long time ago,  and found a sense of relief in doing so.  I don’t want to replace her mom,  I wouldn’t want my mom replaced either.  But there’s room.  There’s room for influence, encouragement,  impact,  and lessons.  I hope to give her what was given to me – an anchor reflection of herself when she has outgrown the custody battles,  the middle school heartaches,  the high school drama and finds herself looking at her own reflection in the stillness of the outdoors.  I hope she sees the same little girl I see today, always.